I used the acknowledgements section of The Misadventures of Edgar and Allan Poe to propose to Jade, my girlfriend of five years. She said ‘yes!’

Publisher’s Weekly have done a little story on it, which you can read here.

The book comes out in January so grab a copy and get yourself a piece of the proposal action (not to mention a brilliant story with fantastic illustrations). 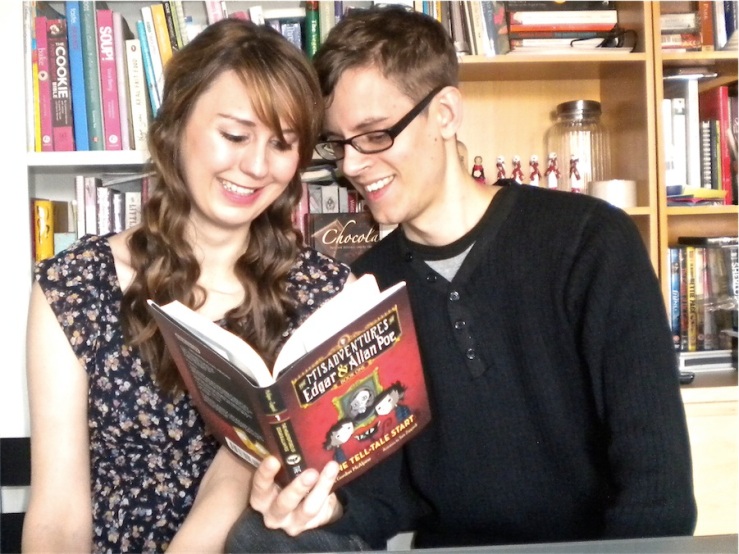 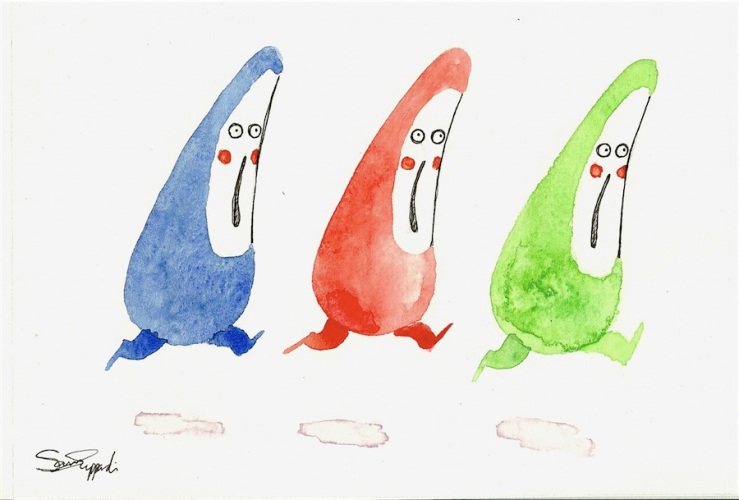 Some characters and pictures you slave for ages over, and they take much torturous time to make real – drafts and redrafts because in your mind’s eye they’re not quite concrete and so getting them down on paper isn’t easy. They don’t look quite right, but you’re not sure what ‘right’ is anyway, so drawing them becomes a compromise, a ‘best fit’ between the image you can’t really see clearly in your head and what materialises in practical terms on the page in front of you. That’s usually the normal way things happen – for me at least.

Then you get the anomalies. Those rare and happy times when, for reasons totally unfathomable, unpredictable and impossible to recreate with any certainty, everything flows ridiculously smoothly. I woke up the other morning with these three odd creatures appearing crystal clear in my head – no idea where they had come from except that they leapt fully formed into my consciousness: a curious, unsettling mix of  the sinister and the comic. A gift, really, no effort required in putting them together or working out what they looked like. They were just there. And when I came to put them down on paper it was equally as easy. I knew what paint and pen I’d use, how I’d go about it, what would go where. And it worked first time. In fact, the only thing I’m not so pleased with is the quality of the scan but you can’t have everything.

If only drawing – or any creative endeavour for that matter – could always be so painless and straightforward. I’ll enjoy this moment while it lasts but I suspect it will be business as usual next time I pick up a pencil.

‘Once the decision was made Eugene Goose led the animals out of the barn.’ 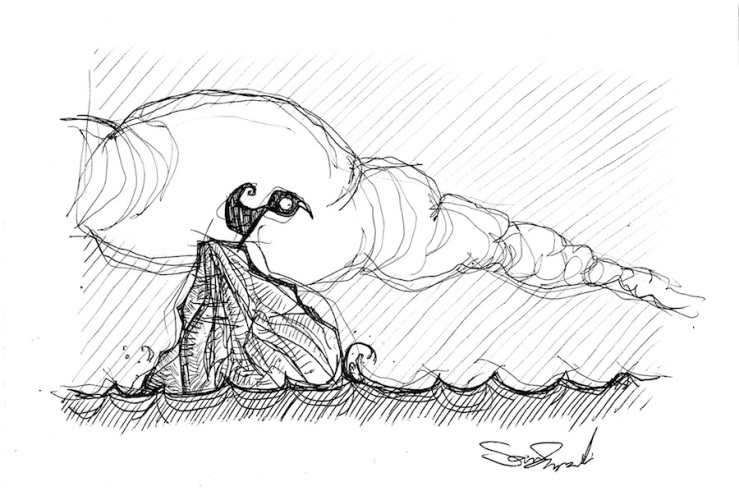 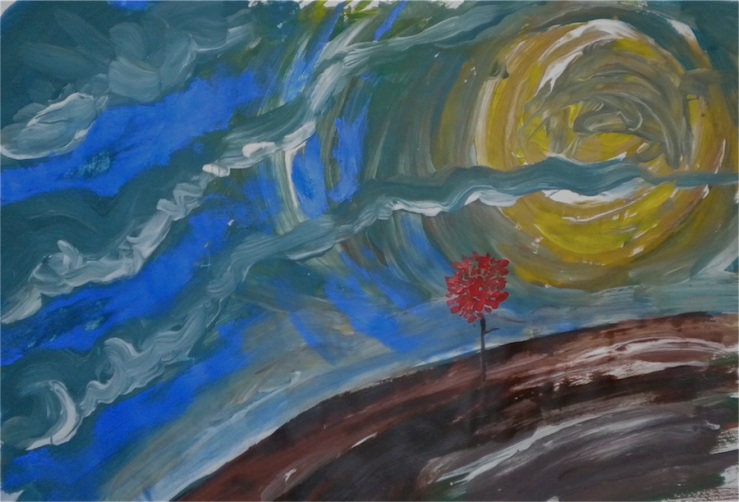 This picture was more process than finished product. I was painting with children and the spontaneity of their painting as well as their love for using copious amounts of poster paint was contagious. It was fun to just layer on huge swathes of paint on a grand scale, not planning anything in advance but letting a picture grow out of the mess. The red tree was added later – an image I confess I stole directly from Shaun Tan’s brilliant book of the same name. Thanks Shaun Tan.

I’ve been asked to illustrate another resource pack for The English Experience School of English (you can see some of last year’s flashcards here). The company runs summer camps in Europe designed to teach children English language.

It’s good artistic excercise doing a project like this – drawing fast and focused and in a style a little different to the usual keeps you conscious of the drawing process and reminds you not to get too used to doing things a certain way without thinking. The pictures for the resource pack are designed to be coloured in so they’re a lot crisper and less scribbly than I normally tend to draw, with blocks of nice white space to encourage children to get their crayons out.

This year’s pack centres round a fantastical journey through a magic book and features a whole range of new pictures and characters, including the little trio below. 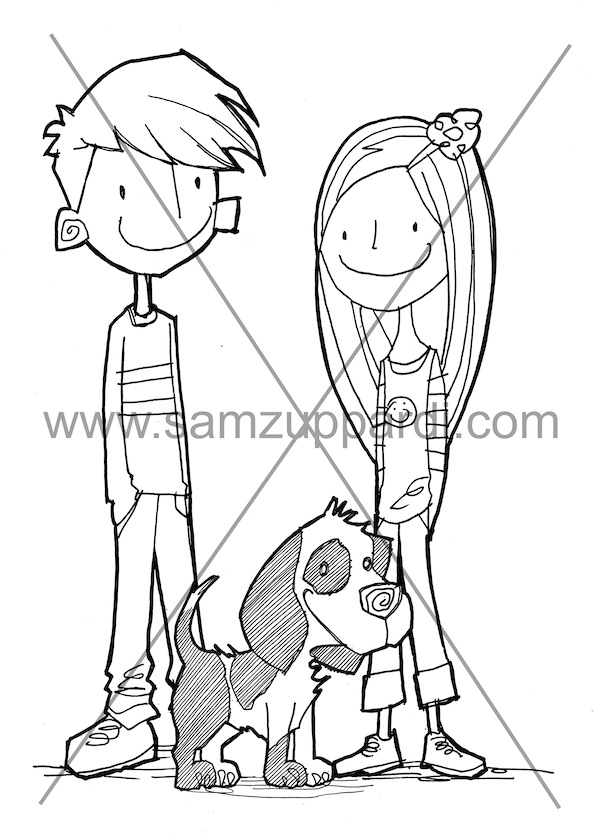 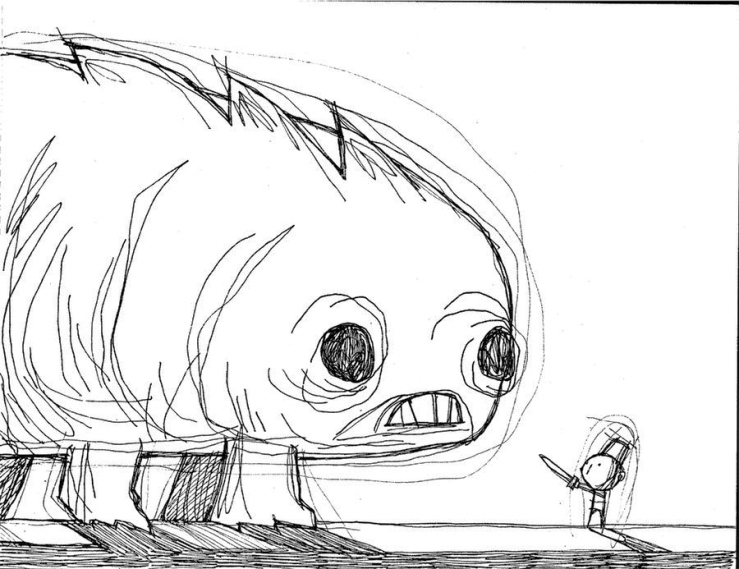 Children’s pictures can be brilliant places to get ideas. There’s often a symbolic immediacy and a rawness to them that bypasses all artifice later learnt and can provide images the like of which an adult mind would struggle to get down on paper. I did this sketch based on a drawing I saw done by a three year old boy, the sheer terror of which I have only managed to approximate in my own version. I wish I could show you the original as well – suffice to say it was pretty scary. The blank gaze and irrevocable forwards tread of the monster, its lipless snarl of pain or anger and the tiny figure before it really stuck in my mind and served as a timely reminder that childhood can be an incredibly rich place to look for artistic inspiration, not to mention an occasionally ridiculously scary place for the child in question.

I moved house about three weeks ago and I have, for the first time, an entire spare room to dedicate to drawing.

Perhaps ‘studio’ is too grand a word for a box room containing a wonkily constructed flatpack desk and my girlfriend’s wardrobe, but it’s the first time that a space for my drawing has been given its own official room and not squashed into the corner of whichever single room in a shared house I’m living in at that moment. So I think it’s worth a mention. And a photo. 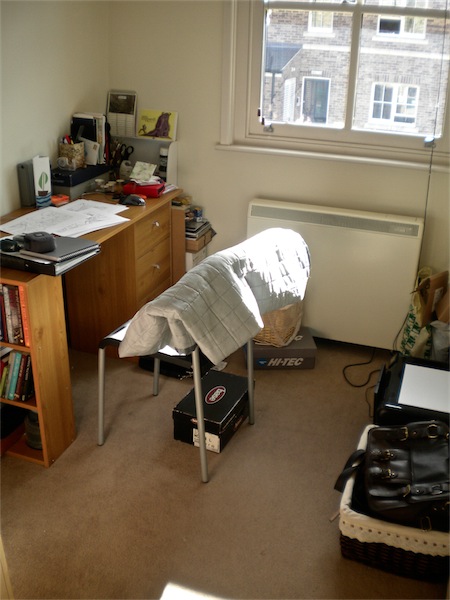 It feels far too clinical and neat at the moment, which I put down to the landlord’s anti-poster prohibition on blu-tack and the fact that it’s still fairly brand new and so not a lot of actual painting has taken place there yet. I’m sure there’ll be plenty of time for it to become nicely cluttered and worn with use.

I’m dead pleased to be able to say that my Princess and the Pea picture was one of the top rated pictures on the Uncovered Cover Art website. Which means I win a free book! Thanks to everyone who voted or left a comment, you can come round mine and read the book any time – it was a team effort. Click the link below to take a look at some of the other very cool pictures on display there… 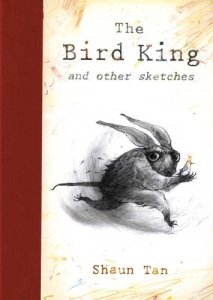 ‘The Bird King and other sketches’ by Shaun Tan is a new compilation of paintings, sketches and doodlings from the author and artist’s various notebooks spanning the past twelve years. I read it and thought I’d write something. It’s less something you read and more something you browse through in a semi-hypnotic trance. Tan, author of several picture books including The Lost Thing, The Arrival, The Red Tree and Tales From Outer Suburbia is an artist who not only has something to say and the creative skills to say it but a reflective outlook that allows him to say it well, and to comment on the creative process intelligently. He’s also somewhat of a personal hero.

‘The Bird King and other sketches’ is a compendium of sketchbook pages that range from brilliantly finished paintings to barely discernable scribbles, taking in weird characters, lost objects, drawings from life and tantalising preliminary sketches from early drafts of his picture books along the way. There’s a huge variety of material on display here, interspersed with the author’s own commentary on his working methods.

What’s really interesting is the chance to see a little bit of how an artist like Shaun Tan works and to find, reassuringly, that it’s not all that different to the way I go about things – sketchbooks filled with meaningless scribbles and rubbish attempts at drawing things I had only half planned or half thought about in the first place, sometimes with unexpectedly satisfying results and sometimes with results that are not satisfying in the slightest, or even half good. I tend to feel that as long as I keep drawing I might occasionally come up with something halfway decent amongst the dross.

Tan’s outlook seems similar. His commentary focuses less on those undeniably brilliant moments when you have a great idea and everything flows and you create something you’re genuinely pleased with very easily. Inspiration, he argues, does not rain down like sunshine on a receptive individual. Blank pages, it seems, can be as daunting for him as for anyone – all that potential possibility waiting to be destroyed – broken down from the limitless ‘what could be’ to the rather more prosaic and frequently disappointing ‘what is.’ It’s a stumbling block I often trip and fly headlong over, finding the finished article is never quite what I imagined before I brought it to life on the page. Only a fair while later can I look at a picture and enjoy it for what it is, without the beguiling spectre of what it might, could or should have been clouding things.

Tan’s answer to this creative impasse is to develop an ability to doodle indiscriminately and without pretension: to avoid worrying about how good something is or what it’s saying and just draw draw draw, using the act of drawing itself to uncover meaning and direction rather than trying to physically shape something already there in a hazy quasi-existence in your head.

Unplanned images created in this way can suggest stories or present enigmatic little moments of curiosity, they can be explorations of a certain shape or landscape, or anything at all really. Most importantly they’re a way of developing a certain way of thinking and of looking at the world, of allowing your brain to make connections between things in unexpected ways, without forethought or planning but spontaneously and somewhat more organically – the result of just scribbling about.

Hearing someone discuss the creative process so honestly is a refreshing antidote to the saccharine and endlessly perpetuated myth that creative or artistic people are blessed with a flood of amazing ideas, which they funnel from some otherworldly creative paradise out into the real world through sheer love. The reality is that failure is always lurking in the wings and for every picture you’re pleased with there are plenty of others that disappoint – those moments when something didn’t go how you’d hoped, or ‘that’ brilliant image or idea just didn’t suggest itself when it was needed. But it’s keeping trying and experimenting that makes things worthwhile and that leads to those moments when everything does just click.

All in all the book is a nice anthology and beautifully produced as always. My lasting sense, however, was of a quiet sadness in many of the pictures – a common and perhaps unconscious thread running through much of the collection. I’d never noticed it in Shaun Tan’s work before but perhaps the accumulation of diverse material here made it clearer. There’s plenty on offer that’s funny and flippant, and even some that’s outright happy, but mostly it’s an overarching sense of sadness that pervades proceedings: at times an almost depressive melancholia that seems initially at odds with the ostensibly child-friendly nature of picture book making, but which is, on deeper reflection, perhaps inextricably linked to the thoughtful, elegiac approach to storytelling at which Tan excels.